An asylum band – though not brass!

Tidying up a folder I came across these images left over from a visit to the West Yorkshire Archives. As they were not brass band related, I ignored them for the research I was undertaking, but since they had been un-archived for me I added them to my bundle.

Music in institutions was not confined to brass bands, indeed many of the orphanages operated drum & fife bands or bugle bands (being easier to learn, play and buy the instruments). String and orchestral groups were not so common, but did exist and a long-standing example is this “band” of the West Riding Pauper Lunatic Asylum, Wakefield. 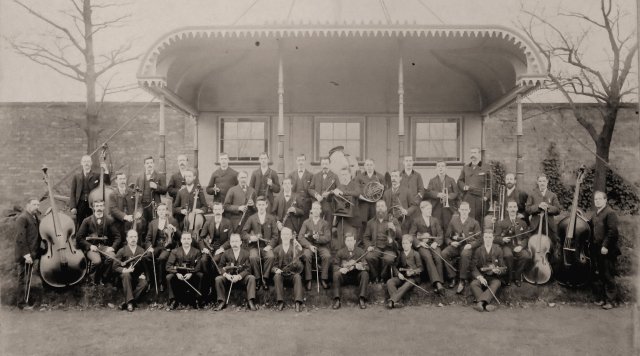 The life in these institutions was grim, especially by today’s standards, and especially so in those “caring” for the disable and mentally ill – some of the treatments were barbaric at best. Much has been written and documented about these organisations, but this image of a man in a restraint chair in 1869, and an earlier drawing of the “spinning chair” treatment serve to illustrate some of what the patients had to endure.

There are also many books about both the West Riding Asylum and other such institutions.